There are some crazy people out there who click Adsense Ads madly. Obviously they are not trying to increase your revenue, but try to ban you from Adsense. I’ve faced these issues several times. When I saw Adsense click bombing for the first time, I was very scared about getting banned. However I found a way to report Google Adsense team about invalid clicks.

Whenever you get a lot of clicks from one user, Google will understand someone is trying to manipulate your Adsense account. Though Adsense credits the fraud clicks revenue on estimated earnings initially,  it will be discredited once they detect it as fraud. You needn’t to freak out over invalid click as Google can detect that. But I always suggest you to report Google Adsense Team whenever you find some strange activity on Adsense. It’ll let you sleep easy.

However, if you clicked your own Adsense ads accidentally, you needn’t to notify Adsense about that click.

How to Notify Google About Invalid Clicks

First of all, it isn’t compulsory to report Google about fraud clicks. But if you want to stop worrying about getting banned, then you may consider contacting with Adsense Team. After all, it could be a reason for getting banned from Adsense.

To notify Adsense about invalid clicks, you’ll need to fill out the Invalid Clicks Contact Form.

It also asks for describing why those clicks seem invalid to you and to indicate suspicious IP addresses, referrers or requests. If you don’t have any description or data to put there, just leave it blank and click on ‘Submit’ button.

That’s it. You are done!

Hope it helps. Once again, it isn’t obligatory to report Adsense about invalid clicks. But if you want to be on safe zone, you can do that. If you find this post useful, like us on Facebook to get regular updates.

Was this article helpful?
YesNo

Istiak Rayhan is the founder of RoadToBlogging.com, a blog that aims to make bloggers' journey easier. Istiak loves to help newbie bloggers to build a better blog. Here's more about him.

24 thoughts on “How to Report Invalid Clicks to Adsense”

This site uses Akismet to reduce spam. Learn how your comment data is processed.

GET MY FREE EBOOK 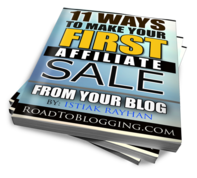